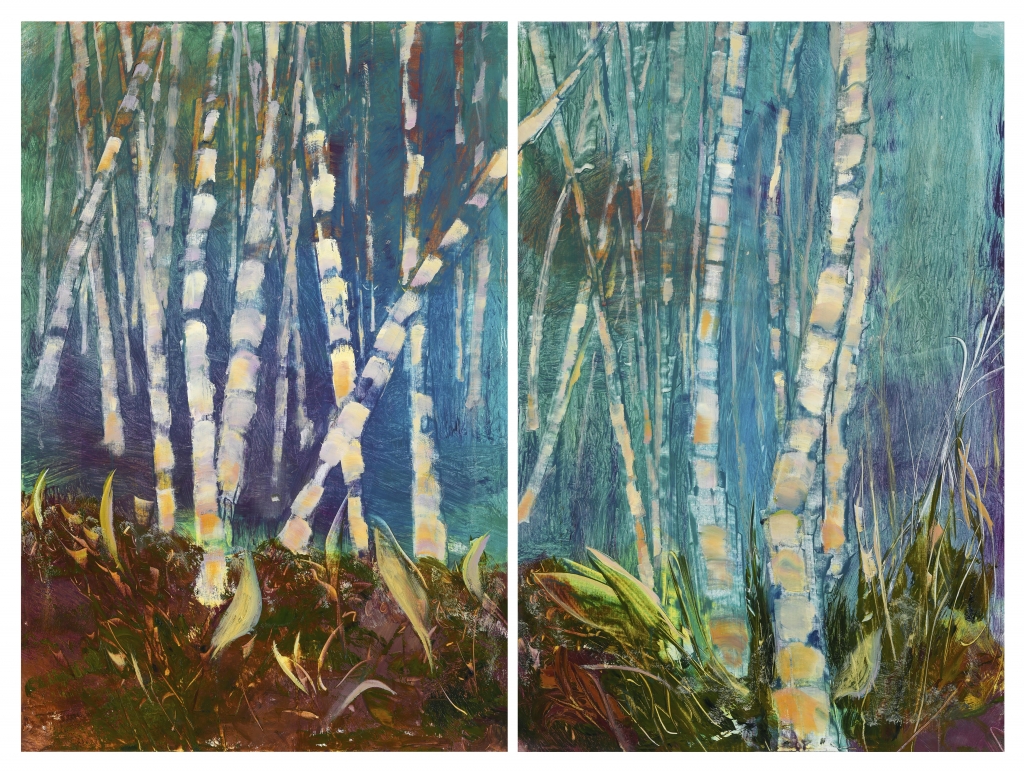 In the framework of its cycle on the emotion of nature, the Abbaye Saint-André is happy to present the unique and majestic work of American artist Jan Dilenschneider on the occasion of “Nature Divine”, an exhibition held from May 1 to June 23, 2019. Based in Connecticut, the artist is passionate about nature and paints landscapes she loves in a state of communion with the elements. Although figurative, her paintings near abstraction through a powerful play of flat pictorial tints the more the artist gets closer to her subject. While the brightness of her colors is reminiscent of the impressionist palette, she uses diptych or triptych to capture the excessiveness of elements in an expressionist style. This fervent defender of nature has been painting for a long time but started exhibiting only in 2012, as she was no longer able to quiet her love for the Earth and the urgency to care for it. Very fond of France, Jan Dilenschneider has enjoyed several exhibitions at the Parisian gallery Pierre-Allain Challier. After Art Paris Art Fair at the Grand Palais and the Contemporary Art Fair of Monaco, her works will be exhibited in the South of France for the first time. A new water series… 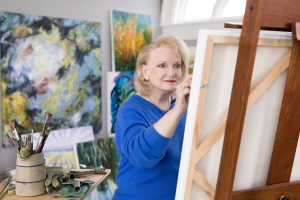 Jan Dilenschneider is an American painter who lives and works on the East Coast. Graduated from the Ohio State University, she started painting at the age of 12. “A powerful memory of my young career as a painter was the day when Roy Lichtenstein helped me hang one of the first paintings I exhibited in a contest. He was the president of the jury and had awarded me a prize for “Les Endeuillés”. I was 17.”
Influenced by expressionist and impressionist painters as well as many Renaissance masters, she explains with humor: “if I could seat for lunch with four artists, I would invite Wolf Kahn, Henri Matisse, Franz Kline and Michelangelo.”
Since 2012, she has enjoyed several exhibitions in the United States and Europe.
After three solo shows praised by critics and collectors at the Paris-based Pierre-Allain Challier gallery, she took part in the 2016 Art Paris Art Fair at the Grand Palais and in the European Art Fair of Monaco. In 2018, her diptych entitled Glowing Fields received an honorable mention at the Griffin Gallery of Creekside (Columbus, Ohio). Jan Dilenschneider is a strong defender of nature but is also very concerned with societal issues throughout the world. Together with her husband, Robert Dilenschneider, she created a philanthropic prize to help artists in politically unstable countries where freedom of creation and expression is often infringed. The “Janet Hennessy Dilenschneider Scholar Rescue Award in the Arts” is supervised by the famous Institute of International Education. Additional information on the artist website: www.jmhdilenschneider.com 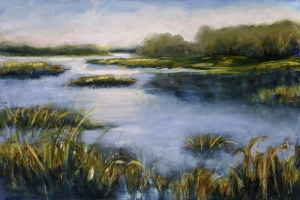 “Academically trained in oil painting, it was only after the disaster of hurricane Sandy in 2012 that Jan Dilenschneider started flirting with abstraction to masterfully render the emotion and movement of Nature, following in the footsteps of the French-American tradition of Georgia O’Keefe and Joan Mitchell”, explains Pierre-Alain Challier.
Colors vibrate and sing along her passionate and vivid gesture on large format paintings. Thick and heavy lines create movement and give a dynamic to her works. Spontaneous raw pictorial matter then takes over the whole canvas, tamed by a harmonious, often-joyful palette, which nonetheless conceals darker depths. Capturing the latent power that exudes from natural elements. 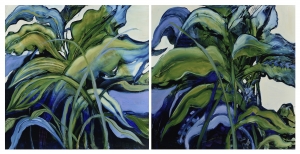 “Falling in love with nature, once again…”

The colorful water of streams, ponds and swamps sliding toward the haze of the sky. A generous yet combative nature playing with the verticality of stems and trunks.
Reflection of our emotions, the changing liquid element is very present in this new series presented at the Abbaye Saint-André.
Jan Dilenschneider represents “the fragility of the world around us” with intensity. Her work is an ode to nature, almost a scream calling for awareness and urging people to protect the environment.
As she lives and works in an enchanting setting along the Long Island Sound, surrounded by a wild and changing nature, she paints as a given, with instinct, trying to preserve her initial powerful and disturbing emotion. She uses the mysterious beauty of landscapes like an arm. An arm of universal persuasion. As visitors will discover during the “Nature Divine” exhibition.

In a vast four-stories space in the heart of the Marais district of Paris, near the Picasso Museum, Pierre-Alain Challier promotes emerging talents and major international figures from sculptor Bernar Venet to German land art pioneer Nils-Udo. The gallery publishes catalogues and organizes exhibitions in France and abroad in collaboration with major institutions. Pierre-Allain Challier also manages the former fund of the Artcurial gallery and ensures its continuity.
More information on www.pacea.fr