Her first source of inspiration: nature, of course. The one that is hidden, that is exhumed, that is examined with a magnifying glass. A constant source of wonder since her youngest age. But also little-known artists such as the talented German glass masters Leopold and Rudolf Blaschka, who created a fairy tale of marine sculptures and glass flowers at the end of the 19th century, already captivating their contemporaries; or the astonishing photographer, also German, Karl Blossfeldt, who at the beginning of the 20th century created a herbarium of unequaled modernity. She always pursues several paths at once, allowing her work to mature for a while, like a graphical fermentation: « I need to explore several directions, to turn around the pot in which all the plants of my personal canopy grow », summarizes this tireless seeker of forms.

After graduating from the prestigious Parisian art school Penninghen, Muriel Kerba became a graphic designer in publishing and then communications, before branching off into youth illustration in 1999. She then published numerous albums (Nathan, Bayard, Hachette, Gallimard…). Parallel to illustration, a desire for personal artistic research slowly emerges, and it is in 2010 that she starts on this path. A first exhibition quickly gave an impulse to this idea and consolidated her desire to go further. She then discovers ceramics and silkscreen printing; two areas of creation made up of high standards and patience. More recently, always on a quest for personal research, the work of paper cut-outs has imposed itself on her. 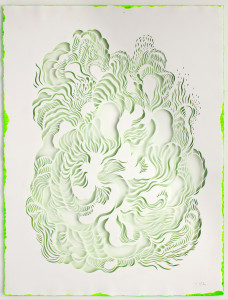 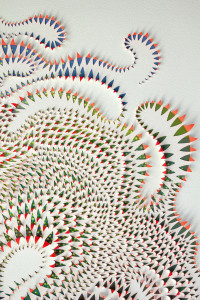 This summer, the Abbaye Saint-André welcomes the exhibition Blooming or the organic, joyful, and colorful universe of the artist Muriel Kerba.

Nature does not offer itself at first glance in the work of Muriel Kerba. Incisions, superimpositions of supports, plays of transparency highlight it step-by-step, and it is a sublimated nature that appears to us through the vibration of the color and the play of the light. Mille-feuilles silkscreens in the series Specimens, openwork papers then curved delicately in her Canopies collection, authentic-looking mantillas in her new Achromes and at the source of this organic bestiary, lead pencil drawings joined together in a collection of curiosities, the Confined fruits in which every day an unknown form hatches. Her works voluptuously embrace the rigor of graphic arts and question our senses as much as our imagination. It is a work of precision, but do not speak to her of laser cutting, of industrial serigraphy: here, the hand shapes the matter from beginning to end, like a paper goldsmith. A necessarily monastic work that frees her creation. « I begin the work of a solitary researcher, both addictive and resourcing, carried by an empirical and experimental approach. », explains this self-demanding artist.

A WORK DECLINED IN 4 COLLECTIONS…

Openwork paper then curved like colored scales or cascading gills and which lets the color appear.

Play of cuts and luminous reflections of the color in a totally white universe, which gives the impression of a three-dimensional drawing.