The splendor of the classical past

The magnifient Abbatial Palace is open to visitors by joining a scheduled guided tour. 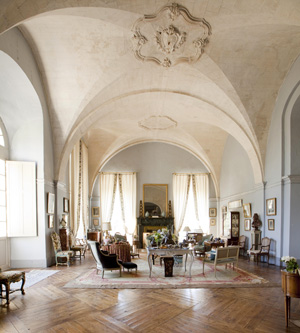 If one can still make out the cloister of the former royal Benedictine Abbey, it is the18th century glamour and elegance that reigned during the Maurists’ tenure that surprises today’s visitors, who can admire the sumptuously vaulted halls, redesigned in the 17th and 18th centuries by Pierre Mignard, architect of King Louis XIV, including an exceptional succession of ceilings created by François Franque.

The monumental entrance door and staircase, the facade of the left wing designed for guests, and the admirable vaults of the great dining hall on the first floor with their beautiful repetitive motifs are the achievements of the Abbey’s last architect, Jean-Ange Brun.

It is important to note that after the Revolution only the entrance pavilion, today’s abbatial palace, was preserved. But it lets us easily imagine the splendour and scale of the place. One can easily visualize from it the highly classical structure of the Maurist Abbey, which incorporated the remaining Romanesque style buildings by remarkable, scientific use of the hill’s downward slope.
At courtyard level, the Abbey comprised a three-story entry pavilion with a pediment, resting on the semi-underground story of kitchens, whose galleries led to the main staircase. The staircase led on the left to the churches and on the right, to a large two-story building on the terrace that was completed in 1742, then polished off in 1763 with a pedimented pavilion identical to the one in the entrance courtyard.

The paintings of Émile Bernard 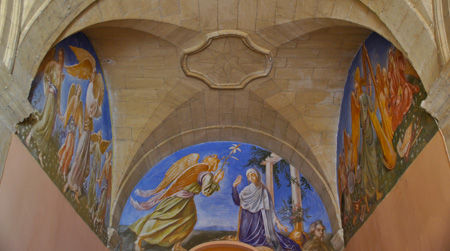 On the ceiling of one of the vaulted galleries in the abbatial palace, one can admire a cycle of three paintings depicting the Annunciation with scenes of musician Angels executed by the artist Émile Bernard. The paintings were done in 1914 when his friend and fellow painter Louis Yperman owned the Abbey. 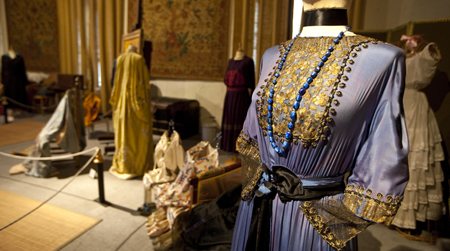 The palace contains all of the Abbey’s history along with various exhibits reflecting the passions of its past and former owners: haute couture and famous couturiers of the 1920s and 1930s, including Jacques Doucet, Paul Poiret and Jeanne Lanvin; the history of dolls and dinnerware from the 19th to the 21st centuries; and contemporary signed ceramics by Christine Viennet.

The turbulent history of the Abbatial Palace

Spiritual and material reform began at the Abbey in 1637 with the Maurists' definitive settlement there and their prior taking control of the community and its finances. An ambitious program of construction, which was to last more than a century, profoundly changed the monastery’s appearance. At Saint-André, as in the major Maurist abbeys, construction was a visible testament to the desire of the congregation to showcase the greatness and power of the church. The design of the new Abbey and its palace, as well as part of its construction, is mainly the work of Pierre Mignard, architect of King Louis XIV, who returned to Avignon about 1680, and who the Maurists called on in 1692 for Saint-André, in 1696 for Notre-Dame des Grâces de Rochefort, and in 1703 for Montmajour. When the Revolution broke out, only the east gallery of the new cloister had been completed, and the decoration of the facade of the left wing was unfinished. Only the entrance pavilion of the abbatial palace was spared, although the top two floors were demolished. In the 19th century, this pavilion served as the dwelling for the Abbey's successive owners. In 1868, the Abbey was occupied by the Congregation of the Sister Victims of the the Heart of Jesus, who rebuilt a second floor onto the pavilion, but, alas, without taking into account the 17th- and 18th-century plans.