The Gardens of Saint-André

Stroll the walkways from one garden to another

In a garden of only 2 hectares (5 acres), it is rare to discover so many noteworthy species (111 registered) as well as such a multitude of historical vestiges. A succession of different styles and moods await : from Tuscan to Provencal, from romantic to mineral, the gardens of the Abbey Saint-André offer a promenade that stimulates mind, body, and spirit. 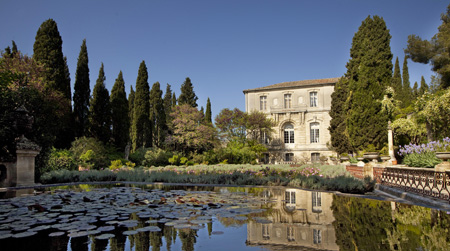 The Italian style garden clearly reflects the types of embellishments made at the Abbey in the 17th and 18th centuries, the peak period of the Maurists occupancy. The garden features two beautiful raised stone ponds, round stone tables with circular benches and sculptures of carved stone, all surrounded by beds of old roses, laurels, and wisteria in the shade of Judas trees (redbuds). Elsa Koeberlé and Génia Lioubow, owners of the Abbey between 1916 and 1950, recreated this lower part of the garden drawing on a mixture of former plans and Italian inspiration. (Models). The plan is a classical one with ordered placement of potted trees and statues in the style of a 16th century Tuscan villa. Running along the terrace wall, a pergola with stone columns is covered in spring with wisteria and roses. Cypress trees encircle this parterre, leading to the powerful and lovely arcade of vaulted arches in the style of Italian architect and artist Piranesi, which were built to support the 18th century monastery that was demolished after the French Revolution. The vaulted arches offer a unique view of the Popes’ Palace in Avignon across the Rhone River, recalling the strategic importance of the site since the 10th century. 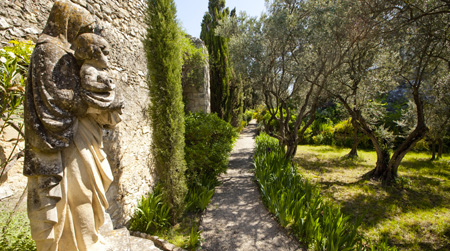 Comprising the largest section of the gardens, the Mediterraneen garden at terrace level offers yet more exceptional views of the Pope’s Palace, the Dentelles de Montmirail, Mount Ventoux, and the Alpilles mountains. The garden extends to the top of Mount Andaon where the chapel of St. Casarie is found. Casarie was a woman hermit, venerated in the 6th century, whose decision to live in the grotto at the top of Mount Andaon marked the beginning of spiritual life on the hill. The Romanesque 11th century chapel built at the site of her grotto, defaced by an observation tower in the 19th century, has been restored to its original state. Olive trees and Mediterranean species mingle harmoniously without specific plans, allowing the plants to develop freely and give life to the stone remains of one of the great monasteries of southern France.
The Church of St-André stands alongside that of St-Martin, with a cemetery in between. The foundations of the two churches were rediscovered by Roseline Bacou, who had them excavated and emptied of centuries of debris. The ancient cemetery, whose tombs were scattered over the hill during the Revolutionary period, has been reassembled between the two churches, and there are tombs from from the 7th to the 10th centuries, some very impressive due to their size and paleochristian style. 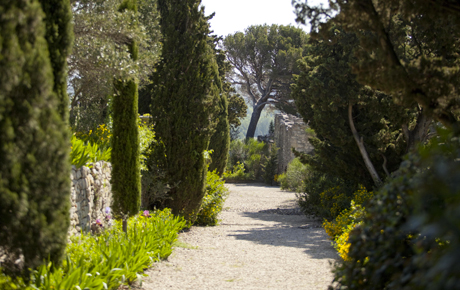 The Story of the Birth of the Gardens

Devoid of water sources and exposed to the mistral wind and the summer heat, the primitive 12th century monastery grew only medicinal plants in its cloister courtyard, where the old well remains. But very quickly, in order to meet the needs of a large community, the monks established a vegetable and fruit garden with a gardener's house inside the walls on the bank of the Rhône River and called it « The Abbey Garden ». At the end of the 17th century, the Maurists who had taken possession of the Abbey built a real garden on the side of Mount Andaon. They dug a well through the rock down to the level of the Rhone in order to water olive and fruit groves, as well as beds of various plants and trees.

A Garden with Stories...

The gardens of Saint-André are classified among the hundred most beautiful gardens of France thanks to the remarkable restoration work done by Elsa Koeberlé and Génia Lioubow between 1916 and 1950, which was continued by Roseline Bacou from 1950 until 2013. Today, Roseline Bacou's family has taken on the task of restoring and improving the Abbey with equal energy and commitment.